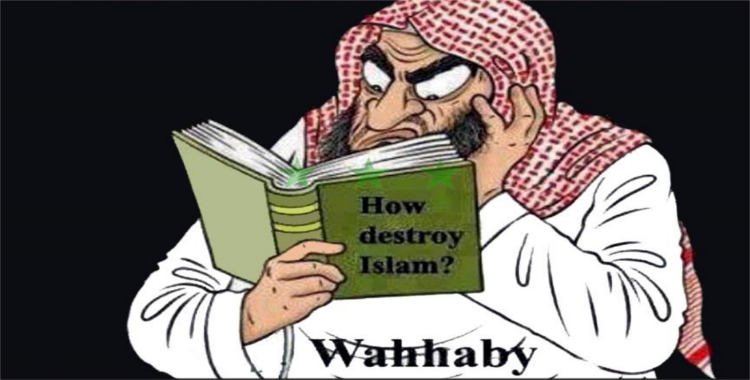 “Khawarijs” in the past and “Takfiri Wahhabis” today, same people with different titles.

They are the ones who entitle everyone, unlike them, as “Kafir” and claim themselves the purest of all. The utmost ignorant, problem creators, dividers, traitors, hypocrites etc etc.
These were/are the people who act without thinking. They are far away and diverted from the Islamic knowledge. They talk senseless and non-logical, which makes them nonnegotiable. They make their own laws according to their own wishes and mentality, and name it as”Islamic Sharia”
They will not think before killing someone. They have always defamed Islam with their acts.

Today in 21st Century, These are those (inhuman+ignorant) species who does bomb blasts in Public places, Masjids, Imam Barghas, or Churches.  Who does targeted killings of Shia and other minorities in Pakistan, Afghanistan, Iraq, Syria etc. Those who burn down the houses of Christians in Pakistan. Those who want to create dispute between (Shia-Sunni).  Those who don’t allow women to drive and vote,  or even going out alone is considered a Taboo according to them. Those talk about faith but fear from a couple of drops of polio medicine.  They have different names in different regions. For Instance: LeJ, TTP in Pakistan, Al-Qaeda in Iraq/Afghanistan. And now as Rebels against Assad in Syria.

They were and are hypocrites. They are never on single side, they always switch sides for their own benefits. Even if it conflicts their faith or ideology, if they have one.

A present example of their hypocrisy. “They were enemies with US in Afghanistan and now an ally of US in Syria against Assad.”

And, These are the people whom the Prophet (PBUH) and his companions hated and cursed.

Abdullah Ibn `Umar (R.A) considered the Khawarij and the heretics as the worst beings in creation, and he said: They went to verses which were revealed about the disbelievers and applied them to the Believers.

Today in Pakistan, these people are backed and funded by Saudi Arabia. There are thousands of their hate speech cells titled as Madrasa which are actively working in Pakistan and producing terrorists. They also enjoy full support from the Saudi puppet Govt. Their party participates in election. They kill and openly announce it over mainstream and social media. Their whereabouts are not a secret or mystery. But still they are free. They go jail sometimes but are either bailed out or they same how manage to escape, every time, even from a high security. Just take Usman Kurd for instance who managed to escape from Quetta cantt. Those of you who don’t know. Quetta cantt is a very highly secured spot. Nothing goes in or out without an inspection.  It is named as “Wahga Border 2”. Yet, still he managed to escape.

Our Govt. and armed forces are more than capable of crushing them, but if they want to, which doesn’t seem like that for now.
Yes, for quieting the people or their protests they arrest a few every now and then but  the problem remains unsolved. They only way to stop them is to stop their production. Govt. needs to inspect all the Madrasas operating in Pakistan, and immediately abandon the infected ones, just like Lal-Masjid. And a major targeted operation is required in a few hot spot districts around Pakistan. Like Mastung, Jhang, Parachinar and the Govt. knows where else.