An inside job, Quetta Attack 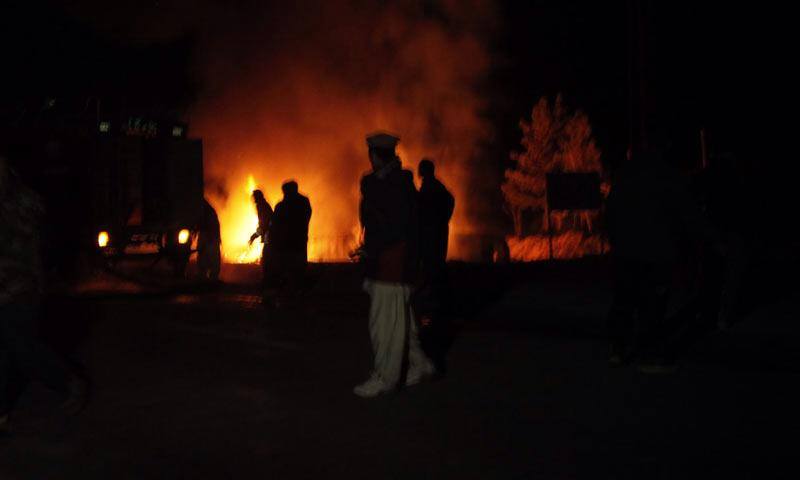 The first Suicide Bomb of the year 2014 on 1st Jan was in Aktrabad, Quetta on the bus of Zaireen (Pilgrims from Karbala).
Yet again Pakistan marks another black day in it’s calendars on the 1st day of the year, In an extremely cold weather of way below 0 innocent  men, women & children became a victim of another attack by the Wahhabi terrorists.

This is not the first attack on a bus in Quetta. There have been many more in the past years, some successful and some not, all claimed proudly by the banned Militant Deobandi Group of Leshkar e Jhangvi, The SSP, or Jaish al Islam.
Despite the court’s rulings against Regional Newspapers which clearly and delibaretly flash the statements of the banned militants, Journalists still haven’t been able to act upon it, for which they claim that they are threatened constantly that if they didn’t convey their statements the concerned Journalist or NewPaper Head would be next in their hit lists.
As always, No Investigation, no criminal arrest will be normal.

Lets Look at the facts of why it can be an inside Job.

You might be searching for news on TV channels on the first day of the year, maybe for something local or something interesting and the people who did go through News channels might have heard that a Police and FC Caravan was duly provided to the Pilgrims from Karbala to Quetta, Pakistan.

What you might have not heard was that the caravans provided were alsmost of the ethnic Hazara Tribe of the Area who are almost all of the minority Shitte Group of Muslims. Second, all escorts are supposed to be equipped with Radio Jammers which jam the signals in the area, making it impossible for any remote controlled bomb to be used.

Now lets look at the facts and figures,

A. Only the Hazra Anti Terrorist Force were injured in the accident from Security Forces.
B. The bomb was remotely controlled, as per the investigative Authorities initial investigation.

Quoting a victim of the past Attacks
“There is no way higher authorities aren’t involved in such attacks, their only purpose right now is to destablize Pakistan & what better way to do it then to do it in Balochistan, the weakest topic for Pakistan after Kashmir. When PAF Bases in Pakistan aren’t safe from inside mouls who help the terrorists, why won’t Balochistan- A highly strategic Asset be?”

Last year the most deadliest Blasts of the County’s history were carried out by the LEJ (Lashkar e Jhangvi) Terrorists, on 10th January 2013 in Alamdar Road Quetta which according to the Islamic Calendar was 28th of Safar A Date at which the Shittes of the Country mourn the Passing of The Holy Prophet PBUH and his Grand Son, Second Imam of Shitte’s Al Hassan Mujtaba
History repeated itself on 1st January 2014 with more then 35 injured and 5 martyred, just like past incidents this will just be a mark on history with no culprits caught.

Makes one wonder, The smoke might just happen to have a source of Fire. This just might happen to be an inside Job & Not just Theories