A Fallen Petal – by Fatima Yawari

There are some very beautiful stories with golden marker narration skill on which attracts the readers. There are also some heart breaking stories that do deserve to be read and forwarded but with the heavy bolt of the lock, let me say, such stories remain unlocked and passed by as the breeze does. I don’t know why I started writing this piece, it is not planned, not scheduled but a sudden rush after meeting the most courageous and the most respected father of the century.

Children are the most delicate flowers of the World. They be touched softly, greeted gently, talked smoothly and hugged widely. Flowers are flowers may that be a black rose or the red one. The fragrance is the same , the beauty is the same , the attractiveness is similar and so is the uniqueness. Children are the king of their roost and their parents have always been near to soothe their wounds and repair their feelings.
I don’t have that courage to jot down what I want to. You have listened to the story. The story cum reality being neglected by the influential people, and Yes of course the Media. 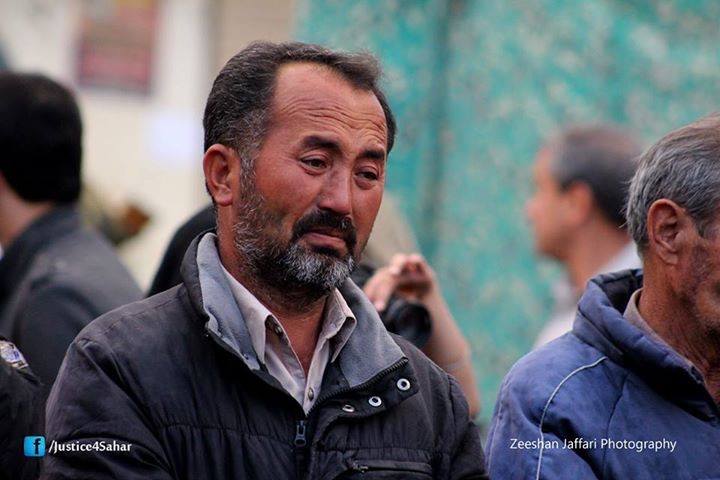 The sobbed eyes and the flagitious crime being narrated… Demands a heart to listen and not be drenched into grave grief.
How on the earth would any father tell this that his daughter’s limbs were broken away???
Which of the World’s most vicious barbaric person have this courage to hang a kid???
For God’s sake tell me how can one be the slave of his lust to this point that they make a kid their victim???
Sell your brains and brawn to the highest bidder but how can you sell your heart and soul???

Lets not go for nebulous reasons behind the scene but lets act humane atleast. You and I should die of shame after hearing to what Sahar’s father said while talking to the elected MPA of the area:
“I wish my daughter had had an accident , been under the truck or some vehicle , she would not have been excruciated.”
“Nobody came to meet me except Sardar Sadaat before you”
“My daughter was not allowed to be buried into Ganj e shuhada”
“Nobody came to console me , is it because I am not of the wealthy beings?”
Her father also said that my daughter is the pride of our community and indeed she is.
One petal has been taken away , gather the others , if you can…!

Here’s a monolog of the pictures people have shared in support of the young heart, as the campaign “#Justice4Sahar” goes viral across border.